Continuing our series on The Best of CafeLit contributors: Dawn Knox

The idea that you could tell a story in 100 words intrigued me and I wanted to see if I could write one. I was thrilled when it was accepted by CafeLit – and I was hooked! But I’ve also had longer stories accepted too. I’ve continued to submit stories because I love being part of the community of the CafeLit writers and am grateful for the support of those people and of course, of Gill who is always coming up with new ideas and is so encouraging.

I try to match the mood of the story for example if it’s a story about celebration, I might select champagne. If it’s a cosy story, I might select hot chocolate. And sometimes, a drink appears in the story, in which case, I use that. My last story which was accepted was dedicated to my mum who passed away a few weeks ago and I chose Latte, which was her favourite drink.

3.     Flash or short story. Why this form for your contribution / s  this time?

My last story was flash fiction – exactly 100 words written for my late mum. I like writing to a strict word limit because it makes me think more carefully about my choice of words. Each word has to be meaningful. My next scheduled story, however, is a longer story and takes several characters from my latest book, The Macaroon Chronicles, published by Chapeltown Books, and puts them in a Christmas setting.

There is an interesting mix of stories on CafeLit which makes it perfect for any reader. If the story on one particular day isn’t your cup of tea, then the story on the following day probably will be! So, if you’re a writer and you’ve written a story but you aren’t sure whether it will be accepted, why not submit and see!

I’m thrilled that my latest book, The Macaroon Chronicles has just been launched by Chapeltown books, having been published on the CafeLit site, chapter by chapter over the last year.

This is the blurb: "The Macaroon Chronicles" is a romp through relationships amongst some anthropomorphic characters. It is one of those quirky books that awakes your sense of humour. Come and follow the fun. Take a tour of the exotic Isle of Macaroon with Eddie and his zany friends who will be pleased to show you the cheese mines, Meringue Mountains and the Custard River while they flee unscrupulous promoters, bandit badgers and low-flying seagulls. But a word of advice – don’t refer to Eddie as a chicken, he thinks he’s a bald eagle. And don’t mention Brian’s small stature, he’s rather sensitive about his size. Oh, and don’t call Brian a monkey, he’s actually a lemur. And finally, if Gideon takes a pen out of his pocket and you value your life – duck.

The Macaroon Chronicles is available on Amazon, here mybook.to/TheMacaroonChronicles 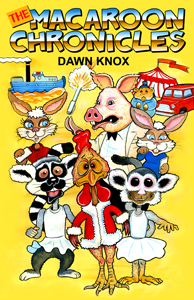 Written in a similar style and the first book in what I refer to as The Chronicles Chronicles, is also published by Chapeltown Books - The Basilwade Chronicles which is available here mybook.to/TheBasilwadeChronicles 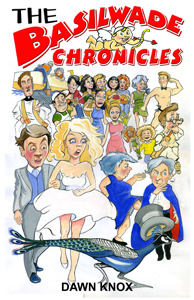 I’m currently writing a romance about a female convict, set in the eighteenth century in London and Sydney, New South Wales.

Email ThisBlogThis!Share to TwitterShare to FacebookShare to Pinterest
Labels: Dawn Knox, The Basilwde Chronicles. The macaroon Chronicles, The Best of CafeLit 9