Has the pandemic intensified the digital revolution? 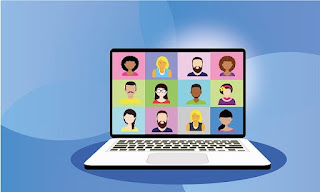 Where would we have been without TV, radio, the Internet, our smartphones and such video-conferencing platforms such as Zoom during these lockdowns?

Getting back to normal

We’re beginning to slowly go back to some sort of normality. And yes it is good to be able to meet face to face to some extent.  Several groups I belong to have taken to meeting in a nearby park and its well ventilated café.

There are some things I will miss about the semi-locked down state: public transport and the city centre being less crowded, museums having timed tickets / entrances, having space in theatre auditoriums.  I don’t like face masks and I’ll be glad when we can ditch those for good but I’ll carry on for now.

Zoom and similar video-conferencing platforms have enabled me to carry on with my u3A groups and my choir. A local association for which I’m on the committee now holds all of its committee meetings and some of its other meetings via Zoom. I volunteer as a reporter of an online community journal.  We have monthly meetings via Zoom.

I have seen a theatre production via Zoom and another one that was produced by a group of theatres and streamed to their audiences. The National Theatre made many productions available for people to watch.

There have also been some interesting talks offered by the National Women’s Register and the Society of Authors.

And we’ve got to do some things we wouldn’t normally do. I’ve attend a book launch in Florida, been to several AGMs that normally take place in London, joined some online U3A groups and taken part in events that I would not have attended if I’d had to travel to them.

Surprising reaction from the Boomers

Definitely there is a divide. Some people embrace the technology, others don’t.  And the 60+ are generally deemed not to. Yet at Talking About My Generation, the community paper for which I volunteer, we recently said we were ambivalent about whether we would like to meet and attend training courses in person or via Zoom. Either was acceptable. U3A recently discussed “returning to normal” and there was strong support for running hybrid meetings – partly in person and partly via Zoom. This is technically challenging but we were up for it.  Some people are still nervous about meeting in person and people are still likely to be “pinged” and have to isolate, possibly still feeling very well.

Can the value-added continue?

Can we continue with all of those excellent on-line events that have been offered? We ought to monetise them. Maybe ask for a “pay what you feel is right” donation?

Theatres and orchestras etc. have lost a lot of revenue during the pandemic. Could they not get some of that back by having a supplementary audience that watch the show from the comfort of their own lounges?

The university for which I worked full time used to spend a lot of time trying to get academics to works a nine to five week in an office. Now academics are very resistant to this. They work much longer hours nine-to five days a week anyway.  They are fortunate enough to love their work so work it doesn’t feel like work. But they don’t want to be confined to a building especially since many live a good way away from the campus. And work takes many forms.  Research frequently takes you away from the desk.

Now they’re asking us to consider whether we really need to be on campus.  They are now   encouraging remote working. They recognise that long commutes cause stress and impact the environment. How this is going to sit with student fees I’m not sure. There is a perception that remote learning is less effective and is cheaper to deliver. This perception ignores the fact that the biggest cost is always staff salaries. There is possibly an argument for some sort of hybrid pattern here. And for allowing academics to work the way they have always wanted to.

And the final final note: my husband spent the last eleven years of his employment working form home.  His employers did well out of him: he was at his desk just after eight in the morning until just after seven in the evening.  So, a ten hour day even if he took an hour for lunch. Yet it was still less stressful than having to commute. We were better off, too, And he could still let the plumber in and take deliveries from Amazon.

Can the digital revolution take another turn?