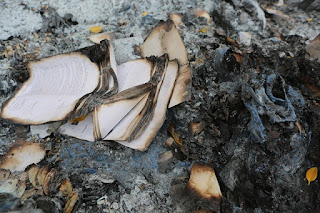 We're just about to release a very daring book. Its title is Citizens of Nowhere, 'Stories about the Global Citizen'. Yes, you probably recognise the sentiments. And yes we're probably being just a little bit political. At least we're doing it the way we know best: we're weaving our theme into readable pieces of fiction.

I might be glad to have my books banned or even burnt. There's no such thing as bad publicity. At least if they're banning or burning them my words must be having an impact on someone. It also means we have something in common with Albert Einstein, J K Rowling, and D H Lawrence.

When books are banned

Books are banned in some harsh regimes. We must not incite the people. They are also sometimes banned because they contain something lewd. There is a very fine line between erotica and pornography and it is one that is very difficult to define. Lolita and Lady Chatterley's Lover may have raised some eyebrows earlier. Now they are part of our culture.  They may be banned because they clash with certain religious attitudes. This is what happened to the Potter the books. They include magic and magic is the work of the devil.

Judy Waite's Game Girls also caused some furore. The game girls are exactly what they sound like. Yet this book is very moral. It all goes wrong for the three young women who have reinvented themselves as prostitutes. The story shows that going on the game is very risky indeed. The book nevertheless caused a fuss. A school visit was cancelled. Books were removed form a library. A TV crew pursued Judy when she came to deliver a workshop at the university where I worked.

And when they're burnt

It seems extreme. Yet recently some of us have wanted to burn the Daily Mail and some people actually did it. Burning books today is probably less effective than it was in 1933. Digital copies abound.

Books are burnt when we want to have a simple version of the truth - or even of lies or of something that is morally wrong, and not be exposed to multiple interpretations of life. The quickest way to get rid of the unwanted books is to burn them.

So everyone should be allowed to say and write what they think. But what if you want to incite hatred or encourage others to take up arms about the status quo?  Do we still allow freedom of speech then? What if we know the writer / speaker is wrong and that we are right? Should we suppress what they wish to say?

There have been examples recently of some speakers being banned from universities because of their unpopular belief system. Is that right?

The whips come out and make us toe the party line.

The agent and the editor nag. "You can't say that. We may be accused of not being politically correct."

Yet some things remain classified. Several of my novels, set in another world, include Hidden Information and Golden Knowledge. The latter is available only to a very privileged few. The former is kept form the masses because a little knowledge is dangerous. Darn, though. Some things that are very sensitive would help so much with my research. Who keeps and curates the information anyway? Perhaps we writers do. We access material under the Freedom of Information act and we use it to inform our writing, thus sharing the facts with others.

Some publishers thought that my Hidden Information and Golden Knowledge was unrealistic. Really? A little knowledge can be dangerous, we all know that. And doesn't MI6 keep some secrets.

We see little of this applied to writing. The film and TV world use it more. Some young adult books, if made into films, would not be passed by the board of censors.

The film industry anyway has the complex description of suitability of films for certain audiences. Some scenes can be cut by the censors. Nudity was only allowed on stage if the actors weren't moving. TV has its watershed, only showing certain types of programme with an "adult" content after 9.00 p.m.

Yet even for writers there is a subtle censorship in that there are gatekeepers all the way. This is especially so for young people who have as well as everybody else, teachers, librarians and well-meaning caring older family members who stand  between them and the book. The publisher is the biggest gate-keeper and some will not accept a book because of the language it uses.  Bizarrely, one that also publishes for children will accept the 'f' word but not the word 'bloody' – it really means 'by the lady' meaning the Virgin Mary.

Censorship must be in other contexts: letters sent in war situations, for example.

Should we also censor books that include extreme violence, or show how to build a bomb? Or does that contravene our right to freedom of speech?

Perhaps it's better to say less now so that you can live a few more years longer and be able to say more in the future.
Posted by Gill James at 20:53