Another interview with one of the Waterloo Festival Writing Competiton winners. 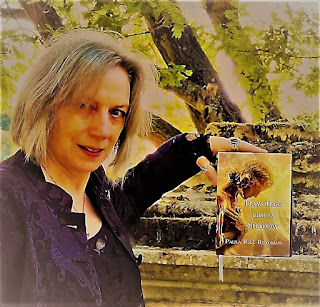 Today I have  on my blog Paula Readman.  Paula has actually been a winner in all three of the Waterloo festival Writing Competitions, so very well done to her.
1) Tell me about your story in the collection.
Oh, which one shall I tell you about, as I’ve been lucky enough to have three of my stories selected? The first story Deucalion’s Flood tells the tale of a migrant who travelled to Britain in the belief he would find a better life.

The second Over the Wall tells the story of two young friends and an accident changed one of their lives forever. My last story Cobalt Blue tells the story about a young lad who has to take his father’s job in a mine to support his family.

2) What inspired you to write them?
With all three of my stories I wanted to push myself outside my comfort zone, and look at the world from someone else other than my white English elderly woman’s point of view. Deucalion’s Flood puts me in a boat with hundreds of other migrants who have been treated as less than human by others, only to arrive in Britain to find they aren’t treated any better here. In Over the Wall, I wanted to include disability in my story, and play about with how it might affect a young boy’s life. Would it make him less outgoing?  Cobalt Blue was the story I did the most research on. An awful soul destroying problem, which I felt, was under publicised. I wanted to give a voice to the children and women whose lives are being undervalued, while the rest of the world races towards a greener future.
3) How did you hear about the competition?

I heard about the Waterloo Art Festival through being a regular contributor to Bridge House Publishing and Chapel Town Books submissions.

4) Have you had any other success in short story writing?
Yes, I have. Over the last year, I have been busy submitting to other small presses in Britain, Australia and America. In 2012, I won the Harrogate Crime Writing Festival/ Writing Magazine Short Story Competition. It was the biggest competition I won to date.

5) What, for you, makes a good short story?
A story from its first word to its last that hooks your attention because you know the writer has edited the piece within an inch of its life after carefully choosing each word to carry you forward.

6) Do you have any tips for new writers or writers seeking publication?
Don’t always go with your first idea when entering a themed submission. You first idea will properly be similar to a few of other writers. Try to think outside the box. Write down some obscure ideas. Being a little brave in your lateral thinking may just give you the edge over other entries for competitions and submissions. Also remember nothing is wasted when your work is rejected.  Gave rejected stories another re-read and edited before sending it out elsewhere.

An excerpt from  Cobalt Blue

A shadow passed over me, as I sat stuffing plastic bags into my father’s boots to make them fit. Then someone called my name. I clumsily jumped up, the boots uncomfortable on my feet.

“Good morning, Abebe.” The crisp whiteness of his shirt held a promise of escape for my friend. I bit back my jealousy and smiled. Over his shoulder, black clouds gathered on the horizon, threatening rain. By the time it arrived, Abebe would be at his desk.

“I’m top of my class now,” he stated, pride reflected in his eyes. He lifted the rucksack’s straps from his shoulders, the weight of the books caused them to dig in. “I’ve learnt how to write my name, and my numbers too. That is good, do you not think?”

“Oh yes.” Envy buzzed around me. I too wanted to learn.

“Come on, Abebe. You don’t want to be late!” The boy’s father waved to me. I acknowledged him with a nod. Abebe ran laughing after his father. His laughter was infectious. It made me wish all the children in the village could join him. As they disappeared around a mountain of grey and red soil, I recalled how six years ago our home had faced a lush green valley. Mother, along with the other women, used to sing as they carried their washing down to the river. Birdsongs filled the cobalt-blue sky along with their beautiful voices. Then the miners came.

Overnight, things changed. The once crystal waters became sluggish and murky and no longer providing fish to feed the villagers. The muddy trickle made mother and some of the women sick, too. Across the scarred and poisoned land, the only sounds we heard were the heavy earth-moving machinery as it tore open another mine.

After Mother passed away, Father had to work at the mine. No longer able to hunt, or fish to feed us. The strenuous work and little food weakened him making him more vulnerable to the sickness that engulfed our village. At eleven, I took his place at the mine while my younger brothers kept an eye on him.

“Raoul, be wise. Cover your mouth, hold your tongue, and listen carefully. Never fight, ” Father said every day before I set off to work. “Come straight home.”