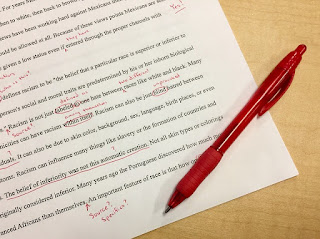 In a Facebook Group I belong to we recently discussed when you should give up on a short story. Almost everyone said: “Never!” I tend to agree. I’m putting together now collections of my own stories but only where they’ve been published elsewhere and when I have the rights back.
And here’s the thing: I edit them again before I publish them.

In fact, I read through again and often tweak those stories that are rejected before I send them out again.

Surely, though, shouldn’t every story be the very best it can be before it goes out? Yes of course. But what was “the very best it could be” a couple of months ago may not be today. We all move on as writers and usually become better.  Language changes anyway. New facts creep in.

On the other hand I very rarely alter stories to make them more suitable for a particular publication.  The story is what it is.  The trick is to find the right publication. I’ll make an exception, though, if I get some concrete feedback from an editor. I’ll often act on that unless it totally compromises what I was trying to achieve.

I’m not alone either, in editing as I read my work aloud. The text sometimes needs to be a little different if you’re reading it aloud form if the reader is taking it in through her eyes. Also, again, you have moved on as a writer since you wrote the piece.

Be warned as well, when that novel that you’ve slaved over and edited to what you perceive to be perfection, is finally accepted, your editor will proceed to tear it apart. Do not be discouraged: she is on your side. We scrape back the layers. The better it is to start with, the better it will become with more editing.

Over the next fee posts I’ll be describing the stages of editing I put my novels through – before I release them to a beta reader, let alone send them out to publishers.
Posted by Gill James at 08:52

Email ThisBlogThis!Share to TwitterShare to FacebookShare to Pinterest
Labels: ediitng