Today I welcome on to my blog Lancashire Authors' Association member Peter Foster: 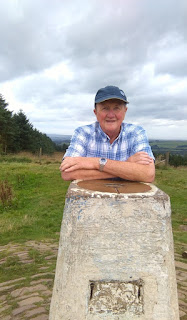 What do you write?

I write mainly poetry, although I have written a few short stories, none of which have been submitted for publication. I’m not entirely sure as to why I prefer to write poetry. I suppose it stems from a love of folk music and story songs in general and the way that a song or a poem can put across a message in a concise and often memorable manner.

What got you writing in the first place?

I’ve always enjoyed poetry and verse and wrote a little but didn’t consider writing seriously until the early nineties when I enrolled on a creative writing course at Runshaw College. I then dabbled a little for my own interest but nothing serious, then shortly after retirement, I joined Sid Calderbank’s Monday dialect group which reignited my interest in writing.

I don’t have a routine. Initially it was just ideas that came to me through daily life. Then as I progressed if I saw a suggested topic that appealed I would have a try at it. Now it’s a mixture of both.

I don’t have a particular work space.

I had never considered calling myself a ‘writer’ until I began reciting some of my work at ‘Acoustic Cabaret’ events hosted by Phil and Sorrel Harty of Music for All, where I began to be asked if my poems were published. Encouraged by the response from my recitals I began try to find a publisher and discovered Leslie Atherton who was then presenting an internet radio show featuring poetry and verse and it was Leslie who persuaded me to compile a collection for publication. The result was The Dream and the Flowers, which became available on Amazon in March 2021. Now I compare my writing to gardening, which I enjoy although I don’t derive any income from it but I consider myself a gardener. The same applies to my writings: despite earning little or no income from it; I write, therefore I think I can call myself a writer.

You can find my book The Dream and The Flowers: A Collection of Traditional Style Verse in Standard English and Dialect here.

I receive very good support from friends and family.

Until recently the publication of my collection would have been my proudest moment but that has now been trumped by winning the Lancashire Authors Batty Cup.

Fine, I try to make sure that any points I make in my writing are accurate.

As for future goals it would be good to put another collection out sometime.

I’ve read many of the canonical poets but think as far as drawing inspiration my choice would have to be Seamus Heaney for the way in which he takes everyday activities and objects, many from his farming background, and gives them weight and meaning relating to the wider world.

Along with the classic Dickens and Bronte novels I also admire the eighteenth century satirists such as Swift and Smollett and feel that the late Terry Pratchett would compare favourably with them. The modern novelists that I enjoy include Michael Connolly, James Lee Burke and C J Box.