Misha Herwin tell us all about her writing today 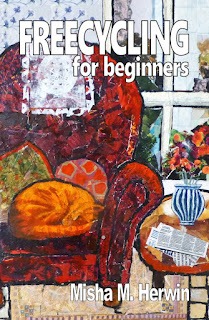 I write book both for adults, women’s fiction, which included, time-slip, family saga and contemporary novels and for kids, fantasy/alternative worlds.  I also write short stories and plays. Working in various genres I find challenging and exciting. It’s great to have written something for an adult readership, which deals with present day issues and then go into my alternative Victorian Bristol where twelve year old Letty and friends are battling the sinister power of the Dark Ones.

I started writing very young as an offshoot of playing with my younger sister and telling her stories.

Much as I try to stick to a routine, it rarely works out. Ideally, I’d write all morning and deal with everything else in the afternoon, or early evening, but life has a habit of getting in the way and if it’s a question of seeing family or friends, they come first.

I’m very lucky to have an office of my own, which I absolutely love. It’s full of books I need for reference, though Google has made a lot of these redundant and pictures and photos that inspire me.

I started calling myself a writer only about ten years ago. Before that it was almost like a secret vice something I’d admit to very reluctantly. Then I decided that if I wasn’t going to get a publishing deal with one of the big companies, I’d go Indie. Now I have eight children’s books out there, plus five novels and numerous short stories, once my books started coming out my attitude changed and I realised that it’s all how you project yourself. See yourself as a writer and that’s how people will treat you.I take myself seriously so do family and friends, all of whom, whether writers or not, tend to be very supportive.

Freecycling for Beginners is my latest novel.

“The time has come for Jane to sell the family home. Downsizing to a flat means everything must go, but her late husband’s favourite chair is far too precious for the tip.

Meanwhile Robyn, balancing her precarious career as a portrait artist with raising an autistic son, is searching for a chair with panache that will allow her sitters to pose in comfort.

Elsewhere in the city Tracey is clearing out her wardrobe at the same moment that divorced and cash-strapped Debbie is frantically seeking a prom dress for her daughter.

None of these women have ever met until Freecycle brings them together and their lives are about to be changed in ways they could never have imagined.”

I’ve always been a keen re-cycler and it was a story on my local freecycling site that sparked the idea for the novel. A mum was asking if anyone had a prom dress they could let her have for her daughter. Since it was late on into the Summer term I wondered why she had left it so late. Had there been an unexpected invitation? Were they too poor to afford a new dress? Or had something happened to the original one and they were looking to replace it? I never found out what happened, but a little later there was another post asking if anyone had a posh car and could give a lift to the prom. Putting these two posts together I imagine who would reply and why.

I loved the idea that random people would be helping each other and that offering an unwanted item could bring people together in ways that would affect the rest of their lives.

I also wanted to write a novel about community and friendship and the wider issues of avoiding waste and caring for our planet. If that sounds very serious, there is also romance and humour and a general feel good factor that we could all do with at the moment.

Freecycling forBeginners is available on Amazon, other sites and can be ordered from all good bookshops.

Now that Freecycling for Beginners is published, it’s back to the Adventures of Letty Parker with book four The Hanging Tree coming soon.