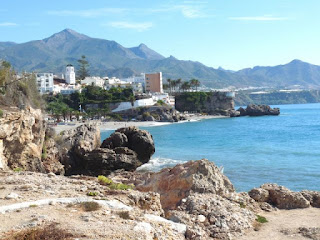 It’s that time of year again. School’s out. People are off on holiday. Some are even risking the sunnier countries though the airports are a bit of a nightmare.

I remember one very significant holiday.  August 1988. We were living in Holland at the time.  We flew to Malaga and for the first time spent our holiday in the lovely Andalusian resort of Nerja.

After we’d landed the pilot told us it was 40 degrees outside.  I don’t think I’d ever experienced such a high temperature then. In those days you had to go down steps from the plane on to the tarmac. Warm air blew at us from the engine.  Or so I thought. Actually the engines were moving the air and making it a cooler.

40 degrees, though, on the Costa del Sol is much more bearable than 28 in Manchester. It’s drier air and there’s usually a sea breeze.

We loved the place and we’ve been going back ever since.

Our children were eight and six at the time and we soon ran out of reading material for them.

And some strange things starred happening:

Then of course there were the wonderful Nerja caves. Such a magical place.

So, I started writing my first children’s novel. I also started a routine of 1,000 words a day – which I would then read to the children that night.

That whole area reminded me of another magical area- North Wales. In both places the mountains come right down to the sea. I spent many childhood holidays there.  Those holidays were full of stories.

I’d always wanted to be a writer, though I was never sure about what I wanted to write. That holiday crystalized it for me; I would write for children. Another epiphany came when I did my PhD in creative and critical writing. I had been teaching teenagers for twenty-five years. It was obvious I should write for them.

So I did, and I still do. Mainly science fiction. I’ve moved on and now also write historical fiction for women.

We’re off to Nerja again soon, this time in October when the weather will be much milder. But I’m looking forward to writing at that place where the mountains dip their toes into the sea.

Email ThisBlogThis!Share to TwitterShare to FacebookShare to Pinterest
Labels: inspiration