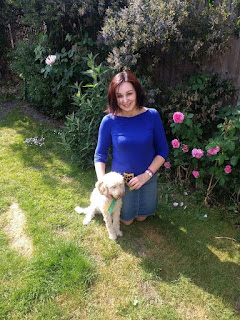 There always seems to be a story in my head, which might explain why I am about to have my twentieth short story published. I love experimenting with different styles, the challenge of tightly written narratives and I can fit short stories into a comparatively short space of time. My dream, which I hope to realise soon, is to write and edit full time. This is becoming closer now, especially as I have been doing more work for Bridge House. I have just enjoyed editing Jim Bates’ wonderful collection, Resilience.
Writing is a wonderful way to reflect upon events and emotions. I was lucky enough to have a story chosen each year for the Waterloo Festival. They are all completely different. The first one, Shouting in a Sandstorm, was written as a way of processing my mother’s struggle with dementia and her eventual death. In complete contrast, the second story, Climbing Rainbows, was humorous, but with pathos and a bit of an edge. My third story, Fishing in Troubled Waters had more sinister undertones. It was set in the past, although the subject matter of physical abuse is still very current. The story presents the protagonist with a moral dilemma if she is to save her friend.
It’s hard to know why I write any of the stories. Many, such as, There’s Rosemary, That’s for Remembrance, which will be published in Mulling it Over, seem to write themselves. My favourite and happiest place to write is in Woolacombe, overlooking the sea through the seasons. I love to walk my dog in all weathers as this is good thinking and relaxing time. We are training for Search and Rescue, so I have spent a lot of time hiding behind trees too!
It has been a great privilege to work with so many talented people. Linda Laurie illustrated our recently released humorous children’s picture book, A Most Amazing Zoo. We work really well together and Linda knows exactly how to interpret my suggested ideas. It’s so exciting to see her wonderful and funny illustrations take shape. Rob Townsend has the most amazing reading voice and he recorded the book which has just been released on Audible. Rob really brought the characters and story to life. This has been reduced by Amazon to £3.25 at the moment and a sample is available to listen to on the page: https://smile.amazon.co.uk/A-Most-Amazing-Zoo/dp/B08FBNHGYT/ref=tmm_aud_swatch_0?_encoding=UTF8&qid=1597157765&sr=8-1
I would like to thank Gill James who is phenomenal. I really don’t know how she (alongside her wonderful team with Debz and Martin) manages to achieve so much!
It’s hard for me to follow through and market a finished book as I want to move on to my next project. I still have a number of ideas on the back burner; next year I hope to be able to work on my YA book.
www.lindaflynn.com

An excerpt from Linda's story:

Only a bold plan will remove the outsider from the fishing community, but is it worth the risk?

Dawn rose in a bloodied mackerel-coloured sky over Clovelly Harbour. The cottages huddled together in clusters, flanked either side of a steep cobblestone hill and shouldering only a side view of the sea, as though afraid to stare into its mortiferous depths.
Inside a cottage tucked into the bottom of the hill, Edna tied fish hooks on to thin lines with cracked, red hands. Her coarse brown skirts were runched up around her legs. She glanced at Peter’s boots by the door, ready for him to be away with the tide. As the thud of his footfall on the stairs ceased, she looked towards him with dark beseeching eyes. “Will you be taking Rufus with you this time?”
He roughly shook his head, “You know we don’t take men on the boats when they’ve been drinking.”
“Yes, I know Peter,” her face looked gaunt and shadowy in the silvery light, “but Rufus is often found drinking. Without his catch the family will surely starve.”
Peter looked away, “He should know better than to waste it all on porter!”
“But Mary has those bairns to feed and another on its way.”
He rammed a foot into a boot, “She chose him. She should never have married that man!”
Edna lowered her voice, “He’s new to these parts, not one of our own. Mary mistook a fish eye for a pearl.”
Peter raked his hands through his dishevelled black hair. “We never take him when he’s like this. He’s a danger to the men and the boat.”