How I Wrote My First Book - and then what happened 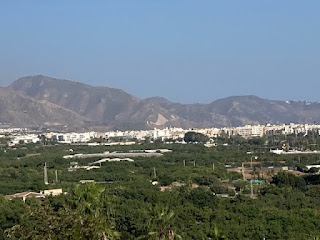 I always wanted to write and I was always good at it - all the way through school.  When I became a teacher I often ended up writing reports for colleagues. I became the secretary for the PTA while we lived abroad and then for the local drama club and wrote monthly newsletter.  Lesson plans and teaching materials were also a form of writing and in fact the first writing for which I was paid royalties was a collection of educational materials.

In January 1988 we went to live in the Netherlands for a few months.  I became a lady of leisure. My husband had a fantastic salary and tax implications meant it was hardly worth me working, though I did eventually get two very part-time teaching jobs. This was my chance. I would write.

We had an electric typewriter in those days, and I tended to work straight on to that. The trouble was, I wasn’t exactly sure what I wanted to write. It’s not so easy to correct as you go along on the electric typewriter as it is these day on a lap top, table or even a phone.

I tinkered around with a little bit of memoir about our life in the Netherlands as expats. Not a bad idea, really, and maybe someday I will write more about that. But it wasn’t quite working.

Then we went on holiday in Spain and we fell in love with Nerja. (it’s a horrible place. Don’t go there.  You’ll hate it. (;-)

Our children, aged six and eight, ran out of reading materials. We had access to a lot of books written in English from our home in the Netherlands but even so we ran out of bedtime stories.  Then some strange things started happening:

In addition there were the wonderful caves which seemed to whisper stories.

So, I stared writing a chapter a day of a fantasy story for them.

This grew into a habit of an hour a day / 1000 words a day.  This has evolved into three hours a day / 2000 words.  I moved on to writing for teens and young adults, which makes sense as I was a secondary school teacher for twenty-five years.

Now I’m concentrating on feisty women, historical fiction for women but which still features some young adults.  I’ve also had published academic papers, lots of short stories, some non-fiction – mainly about the craft of writing and children’s literature,  and some educational materials. I maintain several blogs. I’m also dabbling with writing stage plays though they’re not yet ready to be performed.