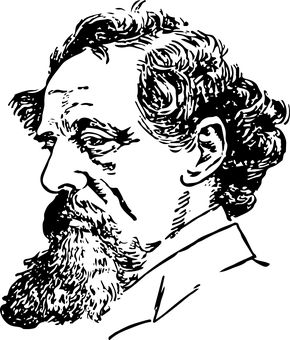 For my sixtieth birthday I asked my husband for the complete works of Dickens.  I was expecting some nice hardback books that would look elegant in a smart bookcase.

I got a Kindle with all of the writer’s work downloaded from Gutenberg. However, there were three advantages to this: I got a Kindle, I got all of his works, not just the ones we all know and this included many of the letters he wrote.

I’ve now read or reread all of the major works apart from Bleak House and Barnaby Rudge.  I’ve recently read for the very first time The Pickwick Papers. Some of his shorter works and non-fiction works are fascinating as well.

I’m delighted to be reading his letters at the moment. This is giving me some great insight into the working life of this writer and making me give some more thought to my own.

Dickens edited two journals – Household Words 1850 -1859 and All The Year Round 1859 -1870. Dickens died in 1870. All the Year Round carried on until 1995. In both journals his novel and those of other people were serialised. In effect, then, he self-published. Once a serial was complete it was published as a normal book.

This affected the quality of the writing in two ways:

A certain structure had to be imposed on the novel. Does every chapter end with a cliff-hanger? In one letter he rejects a serial that has been offered by another writer. It is a good story. But the chapters don’t break in the right places for the novel to be serialised in his journal. He criticizes the writer’s style. In effect he tells her she is telling rather than showing.

Dickens did well.  His novels sold in the hundreds of thousands and the circulation of the two journals was also high.

Dickens eventually settled at his home in Rochester, Kent, Gad’s Hill Place. However he also had a flat in the offices of All the Year Round and he would rent a house in London for the season so that he could give his daughters the social life that young women of their class needed.

He went on many punishing book tours read to sold-out houses. These increased his book sales. As well as extensive tours in the UK he also toured in France and the US. Even if he did these tours with modern transport systems they would be really tiring. He was naturally using 19th century methods. He did take trains but they were not the ones we know today and he was actually involved in a bad railway accident. Boats too were much slower than 21st century ones so crossing the Channel would take several more hours. He describes his transatlantic crossing and it was very poor in comparison with the luxury we would expect today.

In some letters he declines dinner dates and invitations to spend holidays with others.  He has too much work to get on with. He relishes anyway a quiet life at home.

Dickens didn’t have TV, social media or email. Yet he found an equivalent for all of these. He visited the theatre a lot and was quite a critic. Some of his own works were adapted for the stage but he also liked to critique plays written by others. He received many letters and felt obliged to answer them as this was part of his PR and marketing – even those that seem of a more personal nature. In one letter he describes how he finds it hard to muster the energy to answer letters after he has been writing all day.  This reminds me of my attitude to email.  At one point he burns all of the letters other people have sent to him. I do something similar to my inbox sometimes.  It’s a shame for us though; some of those letters would have made interesting reading.

What of life / work balance? Even when in an intense writing phase he would take the time to exercise, sometimes walking ten miles on one day. Alas, it didn’t stop him dying at 58.

When you’re living the dream what do you do for holidays? Do you even take them? His idea of a holiday was to invite people to Gad’s Hill and entertain them there. I also find holidays less colourful than they used to be and I’m always glad to get back home to my comfortable house and writing routines.

He didn’t neglect his family and in many letters it is clear how proud he is of them. Some of the letters are to them.

I am so glad my husband took my wish for Dickens’ complete works seriously. These letters are precious.

That sounds like a wonderful present. I remember one Christmas reading a biography of Dickens for a book club I was involved in. I loved the book & spent the whole holiday reading it, when I returned to the book club in January no one else had read the book. Ah well it was their loss