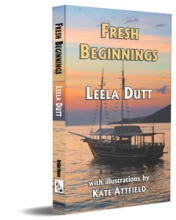 Hi – this is my first post on Gill’s blog.  I’m LEELA DUTT and I’ve just published a collection of eleven short stories called FRESH BEGINNINGS with Bridge House. It’s a mixture of serious and hilarious, according to some of the reviews it’s had on Amazon.  What started me writing, you ask? But I’ve always written, since I learnt to read and write at around five.  Like Gill I read Enid Blyton as a child, graduating to Graham Greene and George Orwell as a teenager. Later I ran round after my own children aged ten downwards, seeking out the second-hand bookshops of Bangalore and Madras to buy copies of Enid Blyton.

Frankly, routines have gone out the window since the children left home.  As for calling myself a writer, I didn’t seriously think of doing that until just the other day, when Gill hosted the launch of FRESH BEGINNINGS and she interviewed me.  But yes, people do understand what I’m doing; my husband publishes philosophy books and articles all the time, and the children assume that we are both writers.

What am I most proud of?  A novel I wrote ten years ago called ONLY A SIGNAL SHOWN, which is a long-distance love story incorporating many of the places I have been to – Nigeria, Rome, the Denmark that my Danish mother took me to, Kolkata which was my father’s home, South Africa, Lesotho, Iceland, Australia, the USA…  and so on. People liked it but it didn’t attract much attention, and so I’ve just signed a contract with 186 Publishing to rewrite it, a job I’m enjoying enormously.  My goals for the future include getting this novel the best it can be, and writing some more short stories for another possible Bridge House collection – if FRESH BEGINNINGS  sells well enough!

Writers who have inspired me?  A mixed bag, but foremost I’d have to say Penelope Lively – I’ve always read everything she writes. In recent years my husband and I both read all the Botswana novels by Alexander McCall Smith as they come out, and also Lindsey Davis’s crime novels about ancient Rome – I enjoy the ones about Falco’s daughter more than the original ones about Falco himself.  I’ve come late to Val McDermid’s crime novels, long after she became so famous, but I love them now because they are so meaty – full of twists and turns, characters that I’ve come to know and enjoy.  In particular her novel about the war in Croatia stays in my mind still.

Email ThisBlogThis!Share to TwitterShare to FacebookShare to Pinterest
Labels: Leela Dutt, on writing

Fascinating! Thanks for sharing your thoughts with us Ms Dutt. I have not yet read any Val McDermid. Which book would you recommend that I start with? What is the name of her novel about the war in Croatia?