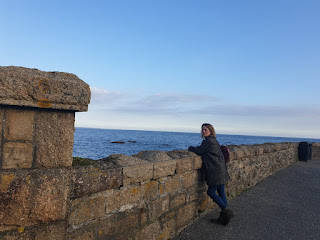 I'm very pleased to welcome Karen  on to my blog today and we're going to chat about writing in general and her new book in particular.

I write crime fiction – novels and short stories. I’ve been writing fiction with a criminal bent for some time. In fact, a fellow writer suggested I watched Breaking Bad a while back because he recognised similarities in my approach. I had written several short stories about ordinary people driven to crime by desperate events. I then got wind of the UEA (Crime Fiction) Creative Writing MA and it seemed a perfect fit.

I was an imaginative child – always making up stories and acting them out. When I went to school, I was good    at  English, and this encouraged me throughout my school and adult career. I became a journalist at 24 and have written for a living ever since.

I prefer to write in the mornings. When I am working on a book, I like to write for three hours and then go on to other things.

In London, I work at the kitchen table. In Cornwall, where I share a place with my sister, I either work at a table that overlooks the sea or in a private room on the top floor of the Morrab Library. The Literature Room has a view of the sea over the Morrab Tropical Gardens and is a favourite with members. The shelves are stacked high with the works of famous writers.

I have slowly moved from the title journalist to writer, as my works of fiction take on more weight. I do little journalism now. I am still hesitant to call myself an author, even though I have a published work

My family and friends are totally supportive of me. They realise that writing is what I do best and that it has been my lifetime ambition to have a novel published.


What are you most proud of in your writing?

Producing entertaining, well-written and original pieces of work. In common with all writers and people in general I like to get praise! It is always appreciated.

I am happy to edit my work. As a journalist, I edited other people’s work and also had to revise my own when producing copy for clients. I am not precious about edits and gladly take on other people’s feedback and corrections. However, I must agree to significant changes. Sometimes I don’t and I will present my case. For example, in my new book my publisher suggested my detective play the mouth organ and not the fiddle. I mulled this over and got back to him with a no. It just wasn’t right for the character. However, he had pointed out that the fiddle I gave him – a Stradivarius -- was far too rare and expensive, and so we settled at a reasonably priced Stentor.

I research things as and when I need to as I progress through a book. I know some people do meticulous research before starting out – but that’s not my style. I like to dive straight in and check facts as I go along.

I have achieved my ultimate goal of having a book published. Now I would like to write a second in the series and, possibly, release a prequel (the book I wrote for my MA and what was originally the first in the series).

So many writers have inspired me – from P.L.Travers in my early years to many French writers in my teens – Colette, Honoré de Balzac, Guy de Maupassant, Simone de Beauvoir and Françoise Sagan, to Agatha Christie, Charles Dickens, Anthony Trollope, Ruth Rendall/Barbara Vine, Iris Murdoch and Anita Brookner,  as well as Kazuo Ishiguro, Stephen King, Ian McEwan, Donna Tartt, Gillian Flynn and Lianne Moriarty. The list is endless and I’m still adding to it.

And now lets speak specifically our new book so tell me all about it. 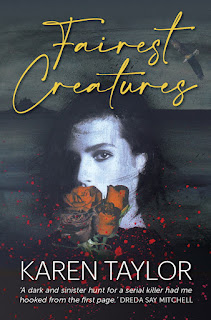 Fairest Creatures is a thriller based in Penzance, Cornwall. It is part police procedural, part psychological thriller and both a whodunnit and a whydunnit.

The action revolves around a serial killer’s obsession with the preservation of beauty, which sees him return to stalk the streets of Penzance in the summer of 2019. It’s 23 years since his first victims went missing, setting DI Brandon Hammett on the hunt for the Sleeping Beauty Killer.

The book has three POVs – one being the killer’s captive ‘creature’. The book begins with this beautiful woman being held captive in an unknown location. Although not physically injured, she is manacled to a chair in a darkened dining room. Her captor is polite but menacing. Her female companions silent spectators. Much of the book explores the relationship between the killer and his captive and her attempts to escape. Meanwhile, DI Brandon Hammett and his team track down the killer.

Art is a major theme in the book, but something I had a good knowledge of. As a result, this part of the book    needed little research. Mummification and the preservation of bodies involved a fair amount, though. The preservation fluid of choice tends to be formaldehyde, but I also discovered a new technique currently being developed called plastination. I read up on and watched an interesting video on the process, but only used the knowledge gained in one short sentence. I learnt, in my creative writing studies, that research helps you create credibility, but you don’t have to spell it all out.

I also had to research several locations other than Cornwall. In addition, I investigated the     effects of early years trauma.

I  had already written the first DI Brandon Hammett book for my MA in Creative Writing (Crime Fiction). This had more commonplace crime themes. I wanted to write something totally different, but also in the crime genre and with some of the same characters. I sought to write a book that would explore modern day obsessions, like the preservation of beauty and the cult of celebrity and also trauma. Early and later year trauma that can trigger terrible consequences.

I have a rough framework for my next book in the series. In common with the other two, the book will feature some  of the same characters and will be current day – this one will be post-pandemic 2022. I may well introduce a more dystopian feel to it, as humankind crawls out of the Covid wreckage and looks to new ‘Gods’ for purpose and salvation.

The book is available on Amazon in digital and print, as well as in print at major booksellers, including Waterstones, Blackwells and Foyles, as well as independent booksellers, like The Edge of the World Bookshop in Penzance and at my publishers, Leamington Books.

Do you have any events planned? 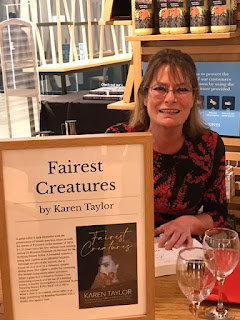 The book was launched at the Morrab Library in October and at Waterstones Kingston upon Thames in November.  There is a blog tour planned for January.

Thank you Karen.  it's been a pleasure having you on my blog.

Find out more about Karen  and her work here: