A few writing “rules” that could / should be broken – occasionally 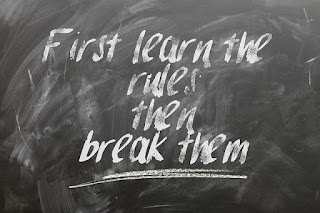 Yes of course, we all know that one. It’s a lovely tool for editors, creative writing teachers and for critique group members.  ‘Show don’t tell.-  you’re  telling us and you could be showing  us.’   Except that sometimes you need to tell otherwise you’re stating the obvious.  Showing absolutely all the time really slows your pace. The advanced skill is knowing when it is acceptable to tell rather than show. And don’t forget: story tellers tell all the time.

Write what you know

OK. So, what about fantasy, science fiction and historical fiction?  So, modify that one: write what you know in order to find out what you don’t know. Write about how the human will feel and act in a world where magic is the norm, in a futuristic world that has done away with money and in a world where there is no water on tap.

Except they’re not all of the time and in fact they include several narrative elements that slow the pace right down:

You lift the pace again by creating very high stakes, plenty of tension, cliff-hangers and some action scenes with very short sentences.

Image by Gerd Altmann from Pixabay

Always write in full sentences and with correct grammar

I’m quite a stickler for this in fact when I mark, edit or critique work. If work is tightly written it is easier to sell to multiple markets.  You should only break these “rules” if doing so will render your work more effective than the correctly written text.  And that is the point. You need to appreciate the norms so that you can measure whether your bending of the rules is effective or not. In particular you need to work out when to ignore “Fragment, consider revising”.

Stay with one point of view

Well Dickens didn’t. Neither did many of his contemporaries and those that wrote novels before him. However, we’ve grown to dislike head-hopping and we favour a first person or close third person point of view.

It is in fact more comfortable for your reader if you only change point of view for whole chapters and most modern readers still prefer the close point of view even when that changes.

Take care also of zooming in and out too quickly.  Modern texts work better if you keep the distance between the protagonist and the reader the same throughout.

However, the omniscient author is currently making a bit of a comeback and one or two writers are zooming successfully.  Again, though, you have to know what you’re doing to do this successfully.

Don’t use too many adjectives and adverbs

But use a few and be discerning. Consider the difference between “walking quickly” “hurrying” and walking briskly”. Can you find something better than “big”, “small” and “quiet”?

No, don’t. “She sat” is NOT the same as “She was sitting” and certainly very different form “She used to sit” / “She would sit” – other versions of the imperfect.  The imperfect exists in every language for a reason. Why waste the richness of our language?

Again, don’t.  It refers to one stage further back in the past and is useful in pinpointing when action took place. I admit, I tend to have one or two and then go to a perfect of imperfect. E.g.

“He had finished dinner and had cleared the table. He was now stacking the dishes in the dish washer. The television was already on.”

So there you have it.  A few justified broken rules. Would you care to suggest some others?