A Conversation with another contributor to The Best of CafeLit 9: Hannah Retallick 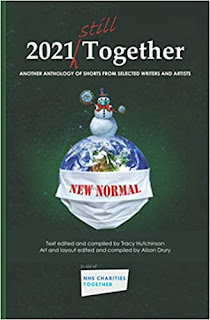 Hannah has two stories in this book as well as The Best of CafeLit 9 and some of our other publications.

1.    So, Hannah, what made you decide to write for CafeLit?

A desire for my work to be read! Several of my writer friends already wrote for CaféLit, they suggested it to me, and I joined them by submitting a story or two. I keep thinking of stopping, but 19 publications later…I can stop whenever I like though. Promise.

2.    Please don't stop.  We enjoy your stories. How did you pick the drinks to go with your stories?

I don’t always consider the accompanying drink until after I’ve written a story…and then I wish I’d given it forethought! In ‘Unspoken, Unheard’, which is a waitress’s frustrated stream of consciousness, she refers to a customer’s ‘weird’ request for a Double Espresso Decaf – that one was easy. In ‘They Want’, a woman is frustrated by her family’s arguing and selfishness at Christmas and finally loses it, screeching as many Christmas carols as possible with her drink raised – it was Baileys, so that was easy too. (Mmm, Baileys. Baileys in coffee. Mmm. Anyway…) If there isn’t a drink mentioned, I tend to go with the overall atmosphere. I don’t overthink it. In ‘Think Pink’, a man reacts to his wife painting the wall bright pink and concludes that her happiness is worth it – Pink Lemonade seemed fitting somehow, fresh and light and, well, pink.

WWhich do you prefer? Flash or short story. Why this form for your contributions this time?

One was a short story and the other two flash. I favour flash because I can hold the whole idea in my head in one go and it don’t take long to write – the first draft, that is. I find the shorter the story, the longer it takes to edit (per word). It feels amazing when it finally clicks into place though.

Something memorable, with strong characters and narrative. The shorter the story the better, in my opinion – it’s potent. Also, by the time I’ve collapsed and sipped my afternoon tea, I feel as if my brain cells could fall into the cup, so it helps if I don’t have to concentrate on reading for too long! I have a short attention span and am easily distrac– What was the question?

I’ve had several stories published in anthologies recently, including Bridge House’s Mulling it Over and Transformations. I’m also excited to have two stories included in 2021 Still Together. It’s the second of two books raising money for NHS Charities Together, complied by a fellow-student from the Open University, Tracy Hutchinson. I didn’t submit anything for the first, 2020 Together, but I’ve read it and I was hugely entertained and moved. They would make great Christmas presents.