An interview with another of our Waterloo winners. 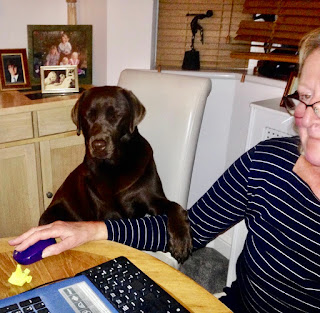 Since first picking up an anthology by John Wyndham in the school library, I became eager to read and later to write short stories. There is something about the form which encourages the reader to want to reach the end without putting it down, like the challenge of taking a breath and swimming under water for the whole length of a pool.

What writers have inspired you?

As a child my mother enjoyed reading dark tales like those of Edgar Allan Poe, which frankly terrified me! I enjoyed a lighter read like the stories of Oscar Wilde, the Selfish Giant still reduced me to tears when I read it to the children later in life, as did the Velveteen rabbit. I admire the writings and imagination of JRR Tolkien and CS Lewis, Stephen King and Neil Gaiman, who in their way have all inspired me to write.

Although I have had countless short stories published in anthologies over the years, I have still found it difficult to call myself a writer. Since having my own anthology of short stories Drawn by the Sea published by Bridgehouse in July 2020, I have on a few occasions plucked up the courage to tell people I’m an author, but it still feels like I’m blowing my own trumpet!! I really cannot thank Gill James enough for suggesting the anthology and her tireless energy and hard work in publishing it; with Martin and Debz they are an amazing team, a fantastic independent publisher.

Do you have a dedicated place to write?

Inspiration for most of my stories comes from walking my dog in places of natural beauty that are open to the sky, whether it’s sapphire blue or the most miserable grey. I find that exploring magnificent green spaces or wandering along the seashore with the serenity and chaos of the ocean allows the imagination to be free. Of course it helps to have a voice recorder in my pocket to remember thoughts and, as you can see from the photo below, I usually rush home and write notes with my canine companion taking an interest … well actually, she usually gets bored and snores beneath the table!

Now, about your story.

I first entered the Waterloo Short story competition in 2019 with Everything has Changed, which was in response to the anthology’s theme of Changing Being. It is a story about grief and coming to terms with the inevitable change associated with it. The theme for the anthology Changing Communities for 2020 inspired Utopian Trend. My daughter, Katie, became vegetarian at thirteen and then two years ago became a strict Vegan; she has extraordinarily strong views, which I respect.This story explores how one person’s views and beliefs might be able to change communities, or even to change the world.

It is strange how sometimes stories evolve all on their own when mixing fact with fiction, the characters seem to take on their own personas as the story unfolds almost by itself. I often look back and wonder if I have actually written the stories at all, but the journeys were always such fun … like living lots of other lives.

Finding a place where you can be alone with your thoughts is essential in my case and a voice recorder can be a useful piece of equipment. I have a battery lighted pen in my bedside drawer, so I won’t disturb my husband if I wake in the middle of the night (which I often do) and need to make some notes. I have always been an avid reader and am never without a book on the go; I find when you read more it encourages you to write more. I would also recommend putting your stories out there by entering competitions from time to time.

Melanie zigzagged down winding lanes, sunshine darting through beech trees onto her dusty window screen. A year had passed since she’d visited Sussex. She reminisced as she approached Burpham, a tiny village saddled to the back of the south downs, before veering off down the quiet lane where she was born. Claypit Lane had been developed, but Perrymead Cottage hadn’t changed. Dismissing cascades of tears, she marvelled at Dahlias, and lanky Foxgloves, all testimony to her mother’s gardening skills. Nearby Grove Farmhouse had been demolished and replaced by a huge grey building without windows, the adjoining horse-field a vast car park for supermarket lorries.

The heart-wrenching sound of cows as calves were taken still haunted her dreams. Melanie would gaze at fluffy white lambs bouncing in fields, innocently asking her mother why farmers couldn’t buy their meat at Sainsbury’s like they did. She became vegetarian at twelve, but soon realised this still condoned cows being forcefully impregnated for milk products, so she became vegan at sixteen. Over the years she discovered that being free-range wouldn’t save a hen’s life; as she aged, and her productivity decreased, her poor worn out body would be used in cheap chicken products like pies and pasties. One-day-old male chicks were destroyed because they couldn’t lay eggs. After investigating the dairy and meat producing industries, Melanie created Animal Utopia, with their slogan being “Freedom for anything with a face”.

Realising the time, she sped off in the direction of the crematorium hoping to see her mother before the service commenced. Visiting her parents over the past ten years had been sporadic since becoming head of Animal Utopia. She toured many countries giving lectures on how communities and their environments could be changed by veganism. After thirty years of campaigning, forsaking marriage and the chance of a family, she finally saw the fruits of her labours when the government started to pay farmers to produce more arable crops. The landscape in the countryside became transformed with the absence of chicken-coops, pigsties and cattle grazing in the fields.