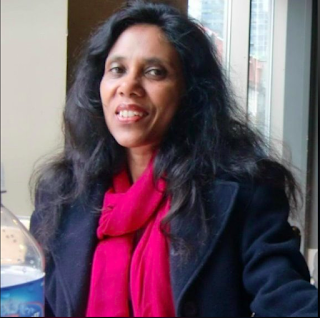 Another interview with a Waterloo Festival Writing Competition  winner. I've been very pleased to be involved in judging the Waterloo Festival Writing Competition  over the last three years. We're currently putting the three e-books we've produced of the winning entries into one paperback book to be launched on 5 December. In recognition of this, I'm publishing an occasional series of interviews with some of the winners. Today I welcome Mehreen Ahmed.

We chat about writing in particular and the winning story in particular. There is also an excerpt of
the story.

My journals. I always wrote them as a child. I penned whatever little event was happening at the time. Or create stories at times too, based on my surroundings.

Not really. I write when I feel inspired. Anything can inspire me, be it a wet path, or trembling of a leaf, raindrops or rainbow.

Yes, I usually write in bed on my laptop in my pyjamas sometimes, with a pot of tea by my side.

When I began to get recognised by reader reviews, and prizes.

I hope so. I hope they understand what I am writing. My mother has been very supportive although she did complain about the lack of punctuations in my stream- of-consciousness fiction.

I don't edit much. I think too much editing distances the end product from the wilderness in the writer's head. There should be some of that left, I think to touch base with reality so to speak. The reality in the head. However, the research must be top notch.

Yes, I would like to write a few more books. And I would love to see my books used in education.

Dolly is about a flower girl. She sells flowers on the streets. One day, she came across a car. As she came to the car, to sell her flowers, she got kidnapped. However, for her personal protection, the girl always carried a doll. She believed in this doll that it would save her from danger one day. And it did. The doll came through when she needed her most. She saved her from her kidnapper.

Flower girls. Once I was sitting in a car when a lad came up to the car to sell garlands, I gave him money and asked him to keep the garlands and sell them elsewhere. He told me that I needed to keep them, because if I didn't then a super power would punish him. He dropped the garlands on my lap through the car window and he disappeared.

How did you hear about the competition?

I heard about it via one of your emails.

Have you had any other success in short-story writing?

I have been published by nearly 160 publishers internationally. I have also published a short story collection and two more short and flash fiction in the pipeline.

I am still writing them and publishing.


What for you makes a good short story?

The one which comes out of reality but gradually fades into absurdity or impossibility.

An excerpt from Mehreen's story:

Not without her,” Ana screamed. “I’m not leaving without Dolly.”

But the police officer kept pestering. She put Ana’s hands in hand-cuff. Ana yelled at the constable. She told Ana that she must leave without her doll. For it was really she who was in trouble, not her doll. Ana realised that police officer didn’t understand that Dolly was her security blanket, now and always. Ever since she was five, now fifteen.

“Trouble?” she screamed. You say, I’m in trouble? A parasite? Under the radar until you caught me out?”

“What else would you call yourselves? You, downy mildews of fester? You steal buns from that bakery, there.

“I only steal for hunger.”

“Little snitch! I’ll get you sorted out.”

“Ha! You make me laugh. I have been like this since five. I sold flowers on Harlon Street, an orphan, and a phantom to most. Those who saw my flowers, never saw me; invisible like a camouflaged screech owl on a living bark. Then one day, someone noticed me,” she said.

“Who? Who noticed you?” asked the police constable.

“He did. The big man. One evening, it rained. I appeared at his car window with a bunch of yellow chrysanthemums. He rolled down his windows and offered me money. He told me to take the money, and re-sell the wet bunch. Just when the lights changed, I dropped the flowers on his lap, saying that he must take them or else Dolly would get offended and she would punish me. The man drove away.”
She looked down at the grooved pavement littered with torn plastic bags. A bed made out of slippery bags for a slippery life. Her doll lay there, too.

“Is this a way to live? You should be ashamed of your life?” the constable yelled.