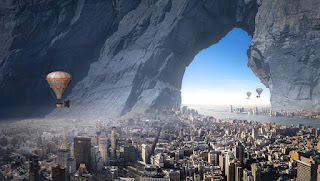 I’m currently working on Peace Child 4, The House of Clementine. This might be described as young adult, new adult, science fiction or science fantasy, or all of the above, and there’s even a suggestion that it’s really near future set in the distant future.

Write what you know we’re told, so it may be puzzling that any science fiction fantasy, science fantasy, paranormal fiction or even historical fiction gets written.

The point is, I suppose, that we explore what we don’t yet know with what we do know. We use what we know to answer the “What if?” question. We use the colours we do know to help us invent the colours not yet seen.

Science Fiction often describes a future situation. The original Peace Child trilogy looked at a world that had stopped communicating. It also found a way to deal with an ageing population. Now I’m looking at a world ravaged by right-wing politics. I wonder where I got that idea from. In a way, I’m using my science fiction to try to understand the world we’re in now. Thrusting it all into a different setting and into the future gives us some objectivity.

Science fiction actually has not been very good at predicting the future. I can’t recall seeing email or even social media being predicted.  Blake’s 7 did have a crude form of the Internet and it was voice-activated. 1984 was nowhere near as dire as the book of the same name though possibly we’re living in that world now.

I’m also currently just over half way through reading a book on which I am to write a review.  In this world humans are partly programmed like computers, mainly in order to control disease but disease is getting the upper hand.

One thing is for sure: you need to plan your world as carefully as your story. The Prophecy, part one of the trilogy, was the novel I wrote for my PhD in Creative and Critical writing. I spent months and months before I started writing working on my world. I had to decide about:

I often used time spent in cafés making notes. As I started writing other questions arose.
The river may be allowed to flow backwards in fantasy and on different planets but there still has to be an inner logic. It’s quite a trick as well to get this setting over to your reader without resorting to blatant exposition.
Posted by Gill James at 09:00

Great work did by you. Informative and problem-solving content that users can easily digest can work for all types of blogs. When a user finds something informative on a blog, he/she is more likely to come back from your side.
Academic Writing Service