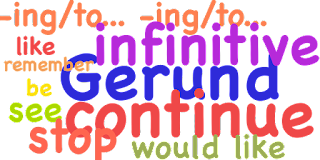 I know my grammar. I was a language teacher for over twenty years and I learnt my first two languages via the "grammar grind" method.  Plus I did Latin in the first year of Grammar School.  Latin grammar is pretty comprehensive. I also argue fiercely that acquiring knowledge of the grammar of the language is a short cut to mastery of that language. Grammar is the backbone. It allows you to know who is doing what to whom, when and how.
I'm with Naom Chomsky on there being a universal grammar. There are certain things we need to say in whichever language we're using and every language will have a way of doing that.
I'd like today to explore the imperfect tense. It seems to have gone out of fashion a little in English and is mistaken often for passive language. I argue there's still a difference between the imperfect, the past and the preterite though different languages allow an overlap of these three.
The name says it all. We are talking about an unfinished or an imperfect action. There are two main uses for it. It can be used for a continuous action or a repeated action.

We often see it as "was …. ing" in English:
He was sitting in the lounge, reading a book.
They were playing badminton outside.
It was raining heavily.
This is the one that is frequently mistaken for passive language. Actually, though, there is a world of difference between "It was raining heavily" and "It rained heavily." The latter is a completed action. The former isn't.

"Was … ing" comes into its own for interrupted actions.
He was eating his supper when the phone rang.
She was loading the car when a cyclist stopped and asked for directions.
He was just about to put the kettle on when lights went out.

Repeated action in the past

We cheat here a little in English and don't use a verb form as such except "was" and "were".
e.g.:
He was a very rich man.
They were poor.
I was happy then.
Otherwise we often use "used to" or "would" e.g.:
He used to cycle to school every day.
She used to live in a hovel.
They would put the milk bottles out every night.
Sometime we use the normal preterite with extra words to indicate that the action is repeated:
He took her to school every day.
In the summer he took two weeks off work.
Every time they crossed the road he took hold of her hand.

A couple of quirks in other language

French has a special form of the preterite it only uses in literature – the past historic. In conversation it uses the simple past – i.e. "I have seen" etc.
In German the preterite and the imperfect are the same.

Why we should care

The imperfect offers a nuance of meaning. We lose out if we dismiss this as "passive" language.