Fans, not friends and family 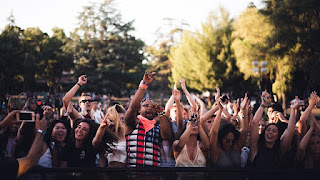 This is something I've also come across with my choir. We put on a grand concert for friends and family in a beautiful old Tudor hall in the town where we rehearse. There was some lovely music, gorgeous home-made cakes and glasses of wine. It was very well attended and the applause was warm.

We repeated it a few months later. It was quite well attended but the applause was a little less enthusiastic. When we offered a third one, hardly anyone came. Apparently they'd heard our repertoire. Choral music wasn't really their thing. There was a limit to how many times they could support us. On the other hand there's that couple who will travel 120 mile to hear us who don't mind at all that they have to listen to some firm favourites…

One writing friend of mine sold over 150 copies of one of our books in the first six weeks. When the second was launched, many of the same friends attended the launch but didn't buy the book. "We bought a copy of the last one," they said.  Yes they'd been proud that she'd been published but actually they weren't really bookish people.

So, the trick is to find those people like the couple who adore choral music, who love your work, make sure they're on your mailing list and that it's easy for them to find and buy your books. When you think of it that way, too, isn't it also about writing something really special that speaks of your own particular brand?
Posted by Gill James at 10:48

Email ThisBlogThis!Share to TwitterShare to FacebookShare to Pinterest
Labels: fans, friends and family