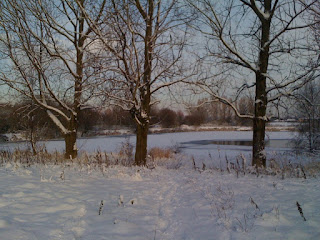 Once again we’ve been trapped pretty much indoors over Christmas – just like last winter. It was colder this time with the cold snap starting earlier but the snow has been less problematic, though I did have a scary journey back from a concert in Chester cathedral on the Friday before Christmas. The snow has only started to melt today.
It really has been too cold to go out. I normally love walking in cold, crisp winter weather but five minutes on Christmas Eve was enough. There was nothing for it but to indulge in extra story time. Isn’t that what this time of year is all about?
I’m now making headway into that pile of books on the shelves in my bedroom. Plus there are all the films – reruns of old cheesy ones and those that have now been around long enough to make it to the small screen – the ones I would have liked to see at the cinema. The Other Boleyn Girl is one such example .Of course, I’ve had to rewatch Miracle on 34th Street and The Railway Children.
Then there are the TV specials: My Family (hilarious), Dr Who (a little disappointing but possibly because it had been so built up) and the return of Upstairs Downstairs (yet to be watched.)
And all the DVDs given as Christmas presents or found on the coffee table, left over from Sunday supplements.
We did get out, though, to see an excellent version of David Copperfield at Bolton’s Octagon theatre. They captured the whole story so well. I’m sure even people who had not read the book would have understood.
Yes, it is time for absorbing story. For a writer it is also a time for making stories. The enforced house arrest aids this also. So here I am, on the day we have our second Christmas –our grown-up children form London are coming a little later – working away. It is, of course, a pleasure. I did have a new computer for my birthday (22 December).
Posted by Gill James at 11:12